“Schiller and Weiss have built an amazing record. What gifts these wild and iconoclastic women have given us.” 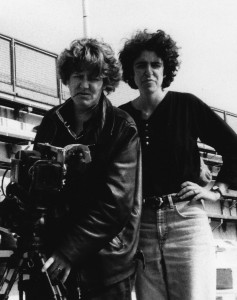 Jezebel Productions was founded by Andrea Weiss and Greta Schiller in 1985, when only a handful of women were directing documentary features.

Jezebel grew out of their collaboration on the groundbreaking documentary, Before Stonewall (1984), which was directed by Schiller. The film premiered at Sundance, Berlin and Toronto, and went on to screen at hundreds of festivals around the world. It garnered many awards including an Independent Spirit Award, and Best Film at the Creteil Women’s Film Festival. The PBS broadcast in 1986 attracted enormous interest, ranging from disgust and outrage that public television would show such a film to an outpouring of gratitude to the filmmakers – for many the film was a rare validation of their existence. The film won an Emmy for Best Historical or Cultural Film, Andrea Weiss won the first ever Emmy awarded for Research, and Greta Schiller was nominated for Best Director. The film launched their careers in the international independent film scene.

From the very beginning, Schiller and Weiss were true independents, making films that reflected their political and artistic values. They set out to make documentary films that uncover stories of people and communities whose lives were overlooked and systematically erased from cultural memory.

Schiller and Weiss went on to create International Sweethearts of Rhythm: America’s Hottest All-Girl Band, which premiered in the New York Film Festival in 1986. How could it be that this all-female, multi-racial big bad was headlining the Apollo Theater in the 1940s, playing to sold-out crowds, and yet was not even mentioned in the jazz history books? International Sweethearts of Rhythm was followed shortly by Tiny & Ruby: Hell Divin’ Women, a film that spotlights one outrageously funny trumpeter from the Sweethearts band, billed as “The Female Louis Armstrong”, and her life-long partner on and off the bandstand, Ruby Lucas.

The critical and popular success of these two short documentaries moved Jezebel Productions into high gear, aided in part by Schiller being awarded the first ever US-UK Fulbright Arts Fellowship in Film. Jezebel Productions set up offices in London and New York, and over the next few years there was a flurry of international co-production. Her Maxine Sullivan: Love to Be in Love, a portrait of the long forgotten jazz star, received positive reviews and prime-time broadcasts in France and Britain. Schiller made a foray into fiction, and directed the quirky short Woman of the Wolf, based on a 1905 short story by poet Renee Vivien. (Vivien was a part of the legendary female community of Paris that Schiller went on to celebrate in Paris Was A Woman.) Featuring Alex Kingston (E.R., Dr. Who) with a cameo by Amelia Bullmore (Scott & Bailey; Gentleman Jack), the film was funded by ITVS (PBS). This strange fantasy film set on a cargo ship to nowhere was well received on the festival circuit before it was broadcast over PBS and Britain’s Channel Four (and chosen as a “Critic’s Choice” by the Sunday Times of London). 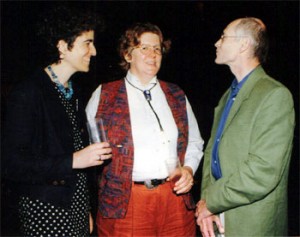 (from left to right): Andrea Weiss, Greta Schiller, and Alain Marchand, director of the Cinematheque Francaise, at the Jerusalem Film Festival in 1996.

Jezebel Productions next embarked on the feature documentary, Paris Was a Woman. Schiller directed and edited the film while Weiss was its writer/producer; she also authored the eponymous award-winning book on which it is based, Paris Was a Woman: Portraits from the Left Bank, which has been translated into many languages. Because of their great love for the city of Paris, for the era of the Twenties, and for the women that flocked there at that time, Schiller and Weiss were determined to produce Paris Was a Woman despite all odds. The film received virtually unanimous praise from the critics upon its release, but it was the overwhelming audience response that was most gratifying. Tickets were scalped at the Berlin Film Festival premiere as though it were a rock concert; long lines ran around city blocks when it opened in the Seattle Film Festival. And by sheer good luck, the programmer for the Quad Cinema in New York City was standing in that line, which led to a very successful New York theatrical release and international art house acclaim.

After the success of Paris Was a Woman, Schiller and Weiss felt confident to challenge themselves further as filmmakers and experiment more directly with the documentary form. Schiller’s The Man Who Drove With Mandela, a portrait of Cecil Williams, a white theatre director who was both an ANC activist in apartheid South Africa and a flamboyant gay man in the sexually repressive Fifties, combined historical documentary with a theatrically staged one-man show (starring Corin Redgrave). The crazy grafting of these two styles turned out to be a risk worth taking: the film won the Teddy Award for Best Documentary at the Berlin Film Festival – the first South African film ever to win an international award — and was a runaway theatrical hit in South Africa. Although few there had ever heard of Cecil Williams before, overnight he became a posthumous hero. A newly restored DCP of the film was selected for a retrospective screening at the 2019 Berlin International Film Festival and is playing in retrospectives around the world.

That same year Weiss directed Seed of Sarah, a half hour experimental documentary telling the story of a Hungarian girl, Judith Magyar, growing up during World War II. Historical documentary footage combines with an avant garde opera drawn from her memoirs; the sumptuous voice of acclaimed vocalist Angelina Réaux is interwoven with Judith Magyar’s spoken thoughts as she looks back on memories she had long repressed. A co-production with the Banff Centre for the Arts, the film premiered in the Marseilles Documentary Film Festival and was broadcast in several European countries.

Greta Schiller and Andrea Weiss went on to combine fiction and documentary genres in their feature film, Escape to Life: The Erika and Klaus Mann Story, which features the voices of Vanessa and Corin Redgrave as the siblings Erika and Klaus Mann, the radical queer children of author Thomas Mann. Produced by Schiller, and written and co-directed by Weiss, together with fiction director Wieland Speck, Escape to Life was a festival and theatrical success across Europe and has been broadcast in Germany numerous times. It premiered in Europe at the Rotterdam International Film Festival; its American premiere was held at the Museum of Modern Art in New York City. Weiss subsequently wrote a full-length literary biography about these two enfants terrible: In the Shadow of the Magic Mountain: The Erika and Klaus Mann Story, published by the University of Chicago Press.

With the onset of the digital revolution of the fin de siècle, Schiller and Weiss began working in digital video making films about contemporary subjects including Schiller’s I Live at Ground Zero, commissioned by Arte television in Europe, about the aftermath 9/11 through the eyes of a nine year old girl who experienced it first-hand, and Recall Florida, a road movie following Janet Reno’s 2002 campaign for Governor of Florida, another stolen election story in Florida.

Weiss directed U.N. Fever, which follows three teams of college students as they compete in an international Model U.N. competition; it’s a character-led story leaving audiences feeling hopeful about the next generation and its commitment to world peace, human rights and justice.

Schiller turned her lens to nonfiction stories dealing with science and society and the pressing environmental crisis, producing No Dinosaurs in Heaven, about the infiltration of science education by Creationists, who are using a back door to get religion into our public schools, and The Marion Lake Story, a short, optimistic film that proves that individuals and communities can make a big difference in mitigating biodiversity loss. She is currently completing Bells of Azaba, set on Europe’s largest Mediterranean ecological restoration site in western Spain.

While living in Barcelona on a Fulbright Award, Weiss produced and directed her next film, Bones Of Contention, a feature documentary on the historical memory movement in Spain today and its efforts to achieve justice for the victims of the Franco regime. The film unearths the completely buried and unknown story of LGBT victims under the Franco dictatorship, using the poetry and mystery of Federico García Lorca, Spain’s most famous missing person, as its narrative spine. Bones of Contention premiered in the 2017 Berlin Film Festival and went on to screen at dozens of film festivals around the world.

Today Jezebel Productions has three exciting films in various stages of production. Please check out our “In Production” pages and sign up for our (very occasional!) e-newsletter.

Jezebel Productions remains steadfast in its determination to tell stories that make us reflect on our own purpose on earth. Schiller and Weiss have developed considerably as filmmakers along the way, always putting their work and their lives where their hearts are. The body of work they created over the decades continues to be innovative, thought-provoking and entertaining.

THE WORK OF JEZEBEL PRODUCTIONS HAS BEEN SUPPORTED BY:

and many, many individuals. Thank you to all of the above.

If you are a film researcher or scholar looking for more information about Jezebel Productions, the films we’ve produced, the original research we did in the process, or the history of the nonprofit organization, there are several archives you can contact.

To purchase archival footage and outtakes from our films: visit Oddball Films.

The research materials for our films and our papers pertaining to the history of the organization are held at the Sophia Smith Collection at Smith College, Northampton MA.

The master materials for our films (16mm and 35mm film negatives, sound mixes etc) are held in various film archives around the world including the Legacy Project at the UCLA Film and Television Archive, The Museum of Modern Art NYC, and the National Film Archive of the British Film Institute.