Before Stonewall has been selected by Carla Hayden, Librarian Of Congress, to the 2019 National Film Registry. Films are chosen “because of their cultural, historic and aesthetic importance to the nation’s film heritage."

We have created a special offer for the super fan: get the newly restored DVD; the original companion book by Greta Schiller and Andrea Weiss, and the 1985 release poster, all for $125.

You owe it to yourself to see it. Laced with humor and irony… of vital interest to everyone.— Judith Crist, TV Guide

I can’t praise “Before Stonewall” too highly. It’s a fascinating document. It’s worth watching over and over again.”— Stage and Screen (London)

In 1969 the patrons of the Stonewall Inn in New York City’s Greenwich Village transformed a routine police raid into the beginning of the LGBT movement with three nights of rioting—an event which has since become a cornerstone of modern gay history.

“Before Stonewall” moves through 20th century history and examines the social and cultural context leading up to this “sudden” burst of political energy: highlighting the social experimentation of the Roaring Twenties, to the discovery of the true size of this “hidden society” during World War II, to the scapegoating of homosexuals during the McCarthy era, to the development of the early homophile rights movement.

“Before Stonewall” provides an informative and engaging portrait of the history of LGBT experience in America. Using filmed recollections and a wealth or archival material, it traces the social, political, and cultural development of the LGBT community.

The 16mm negative was scanned and digitized at Periscope Films in Los Angeles. The file was then color corrected at Edition Salzgeber in Berlin, who created the ProRes and DCP. Director Greta Schiller supervised the process and approved the new ProRes and DCP.

Buy the illustrated book “Before Stonewall” by Andrea Weiss and Greta Schiller!

Before Stonewall: the Making of a Gay and Lesbian Community by Andrea Weiss and Greta Schiller. An illustrated historical guide to the Emmy Award-winning film. Naiad Press 1988 (out of print). Out of print collector's edition signed by the authors. $20. 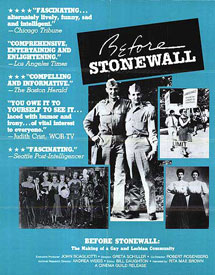