“Makes you glad documentaries were invented!”— Atlanta Journal and Constitution

”Each film is excellent in its own way. They serve as powerful testaments to survival and affirmation.”— American Historical Review.

From the Piney Woods School in the Mississippi Delta to the Apollo Theater in Harlem, New York City, this toe-tapping music film tells the story of the swinging, multi-racial all-women jazz band of the 1940s.

A 16 piece band with a strong brass section, heavy percussion, and a deep rhythmic sense, the Sweethearts were not just a novelty but featured many of the best female musicians of the day.

Produced and directed by Greta Schiller and Andrea Weiss. Produced in association with Channel 4 (UK)

DVD includes all three titles: “International Sweethearts of Rhythm”, “Tiny & Ruby: Hell Divin’ Women” and “Maxine Sullivan: Love To Be In Love” and includes bonus interview with the filmmakers at Lincoln Center, New York, on the 20th Anniversary release of the newly restored master, hosted by New York Women in Film and TV.

This award-winning trilogy of films on one DVD makes a great gift for any occasion.

*HOME DVD: INCLUDES ALL THREE FILMS ON WOMEN IN JAZZ

*INSTITUTIONAL/EDUCATIONAL DVD: INCLUDES ALL THREE FILMS ON WOMEN IN JAZZ 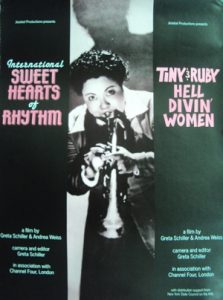