In April 1969, Black and Puerto Rican students shut down the City College of New York, demanding greater access for students of color. Although the Sixties are widely known as an era of student activism, far more attention has been paid to white middle class students opposing the Vietnam War than to a handful of students of color on a campus in the middle of Harlem. Yet this protest transformed the culture, mission, and curriculum of higher education. Fueled by the era's revolutionary fervor, the CCNY strike turned into an uprising, leading to the extended occupation of the campus, buildings set on fire, and the forced resignation of the college president. The Five Demands documents this explosive student takeover and its lasting legacy. 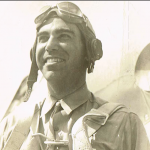 Flying Lessons is a personal essay assemblage about my father who risked his life as a pilot during the Berlin Airlift in 1948-49. In response to the Soviet Union’s blockade of West Berlin in the first major crisis of the Cold War, the United States and Great Britain flew in a steady stream of food and supplies, enabling Berliners to survive the 11 months siege. My father was a pilot in World War II, and an American Jew who had lost his European family in the Holocaust. Growing up, I always wondered why he would risk his life to feed starving Germans whom the Allies had just defeated. Flying Lessons looks at the largest humanitarian relief effort in modern history through the lens of my father’s story. Reflecting on such thorny issues as familial ties, ethnic loyalties, and the shaky line between cultural identity and nationalism, this short film resonates deeply with current affairs, ultimately asking, what is the responsibility of the individual in times of political crisis?